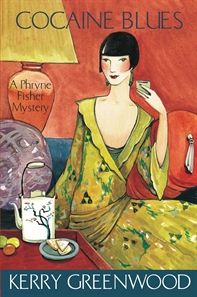 This episode of I ♥ BOOKS is brought to you buy my love of murder mystery series which are aired mostly on the ABC.

But I don't tend to watch TV. I normally get a hold of the hold entire series (on DVD right?) and try in watch it all in one sitting.  There's a meme about that, I'll go find it... 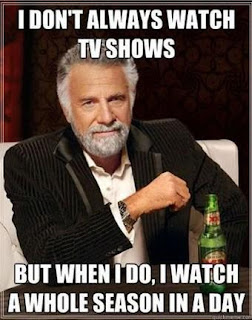 This is totally true.


So that's what I did with Phryne Fisher's Murder Mysteries. I love it.  Even more so when I ventured into civilization over the Christmas holidays and bought the first book in the series.  When I went to Brisvegas the other week I bought the next 5.  Note though, that book stores are notorious for not having the books available that you actually need - so I did have to go searching.

I have only read the first 3 in the series so far. I'm keeping the others for later.

Basically:
Phryne Fisher arrives in Australia, she gets a little bored and gets involved with all sorts of adventures which takes her interest so she begins her own private investigator practice.  It's set in the 1920s, she's a bit of flapper and a vixen. I also find her a little conceited.

What do I love?
I love the characters, the times, the clothing descriptions, the quaint dialect, the stories are interesting and can be pretty gritty.

I'm not one of those people that compares the novel to the movie but I do like that for the most part the stories are basically the same - even sometimes down to the costumes.

What don't I love?
The plot is an intertwining of several things that are going on, too coincidentally at times and you can often tell what is going to happen in the end pretty early on - possibly not helped by the fact that I have seen the TV shows. Errors in editing - small but enough to catch my attention - novels that I pay for should be perfect.

Posted by Pammymela at 4:22 pm