How do I feel about me?

I wrote this on the 1st of Aug, but haven't really felt like sharing.

I guess with this week's Aussie Curve's theme being 'vulnerable' I thought it was about time.

We have also been quite rocked at school because a new teacher has joined us with a PhD about food.  Everyone has been really putting their best 'diet' on show, and there has been so much self body dissing.  But as I said to someone today, 'You are an intelligent women, you don't have to justify your food choices' or something like that.  I wish they would get over trying to impress someone who really shouldn't matter in the big scheme of things. 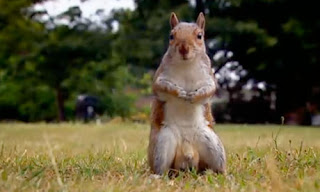 I have a fat belly and heart shaped hips that stand out like the genitals of this squirrel; plus teacher wings and I have boob-alicious huges* as well.

I know all this and I don't think the people that I know and work with think any worse of me because them.

But as soon as I have lost weight (because I've managed to remember that I exercise at 5:30 in the afternoons and not because I cut out yummy food from my diet, OR I happen to have coordinated an amazingly flattering outfit that has made me magically lose weight) I get the comments.

Have you lost weight?
What have you been doing?
You're looking good!  (The most awful backhanded compliment ever)

I'm sure people have all heard them before.  I'm not covering new ground here.

I have fad dieters and fitness afficanados and fad dieters turn fitness aficionados at my workplace. I hate the idea that I sometimes feel like I have to boast to people that are talking about their daily run that I too exercise - I don't think they'd believe it anyway.  I bite my tongue or eat my lunch instead.

I studied nutrition at Uni - I found the subject boring because of the lecturer and not because of the content. I'm interested in health and would at some stage actually like to do more at that uni level (no not more study! Ek!) I know that when people start to talk about their 'diets' that half the time they are quoting something they read in Women's Fortnightly** or on Facebook or something their mum told them twenty years ago. I know that I really want to correct them, but I also know that they would look at me and my figure and think, 'What would you know.'

So although I am at the moment the most accepting of my body I have ever been I'm still facing confidence hurdles.

And just because I started with a list of what are my perceived shortcoming here is a list of some of the things I love about my bod:

Tiny ankles, killer calves and outer thighs that could kick a man senseless. Pouty lips and soft, feathery hair. Shoulders a swimmer would be jealous of if they didn't already have them, strong fast growing nails and a butt my husband loves.

* my new name for my boobs
** not a real magazine
Posted by Pammymela at 7:18 pm